In her original human appearance, Promethium had beautiful long blond hair, a willowy body, long eyelashes, and glittering brown eyes. Other times however, her hair was green and her eyes were black. For clothing she wore the same long black dress and wore a red crown with heart-shaped ornaments. In Space Symphony Maetel her crown would later change to ornaments that resemble gears.

In Promethium's machine body form, she is best known for her pale face with black eyes resembling a noh mask. Her body is covered in a black silhouetted veil with tendrils that resemble hair dangling from her head, and a red central module on her forehead. Occasionally, she wears a beaded tiara.

The TV version gives her a more human-like appearance with blue hair and wears a black cloak that goes down to her sleeves. The manga portrays Promethium as a large head with two faces, one resembling Maetel and the other resembling her noh mask face. 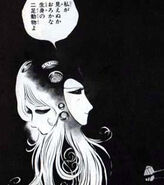 Queen Promethium in the manga

Queen Promethium in the TV anime

Queen Promethium is driven for eternal life. Originally, she used the mechanization process to save the lives of La Metal from eternal freeze but after being mechanized and fusing with the machinery through nanotech, she became cold and ruthless even to her own family.

Promethium thinks very highly of machines, seeing them as the pinnacle of civilization. After becoming a Machine Man herself, she began to look down on beings that still had flesh and blood bodies, seeing them as nothing but animals that further the Machine Empire, the one exception being her daughter Maetel. Promethium sees mechanization as the highest form of life and those that reject are nothing but fools to her.

Because of her vie for control, Promethium had every one of her citizens including Maetel become part of a slight hive mind that shares thoughts and feelings, which prevents any secrets and thoughts of rebellion. Even her own citizens are nothing but a means to an end for her as many are forced into hard labor. It was her own overconfidence in Machine Men's supposed superiority over regular people's sweetness which eventually lead to her and her empire's downfall.

Before her transformation, Promethium was described as being much more kind and caring to her loved ones. She had faith in her husband, Dr. Ban for his abilities in robotics as well as their closeness. Among her daughters, Maetel was very close with Promethium and they often communicated before making their decisions, Emeraldas however did not seem as close but was still disappointed with what her mother had become.

After becoming a Machine Man, Promethium saw their value only in what they would be able to do for her empire and nothing less. While Dr. Ban's disappearance was marked as a betrayal due to siding against her and Emeraldas leaving the empire entirely, the only tie that Promethium had left in her family was Maetel. Maetel is also the only flesh-and-blood being that Promethium accepts if it can further her goals. Unfortunately, Promethium does not completely trust Maetel and has her monitored through a special implant that has Maetel's thoughts and feelings shared between them, in a way always being in the back of Maetel's head. Maetel while despairing over losing her mother, also turned out to be another enemy. Some works tend to show her displeasure in Maetel's betrayal such as threatening or attempting to kill Tetsuro right in front of a begging Maetel. Other works even show Promethium calling some androids Maetel as a substitute.

As ruler of the Machine Empire, Promethium holds the highest authority in the empire controlling all military and technology through a special control unit. Because of this, Promethium can control the Living Screws, the supports of the Great Mother Planet and changing regular humans into these screws. The process causes a massive windstrorm and when lightning strikes the targeted body, the atomic structure of the body is changed into the screw. Tetsuro however was able to override this ability thanks to his will and Promethium's subordinates' betrayal. She is also able to project three-dimensional images disguising her form and even an entire planet.

Promethium is able to literally 'rewrite' a person's soul (personalities, feelings, spirit, etc.) by accessing their Soul Ring, a person's soul in data form. This allows her to change others into loyal soldiers that cannot go against her will. She can also copy the data and implant them into androids to suit various tasks. This is what allows Promethium to reconstitute herself, using her own data to build new bodies for her.

Using a special system, Promethium can utilize a hive mind system that allows her to see and feel what those in the network are going through. This allows Promethium to spy on progress and check for any signs of betrayal, allowing her to control those individuals. However, this system has one vital flaw; Promethium's own ego. Promethium is highly confident in the superiority of the Machine Empire and the security systems she had installed. It was when this arrogance was at her highest that she was distracted by events such as a living screw going wrong that she was taken by surprise and this final surprise proved to be her undoing.

The PlayStation and CR Pachinko games also gives Promethium the ability to shoot bolts of energy from her hands and conjure a bell-shaped barrier to prevent attacks from hitting her.

Promethium for an unprecedented amount of time had ruled La Metal but with its artificial sun failing, Promethium had Dr. Ban start the experimental process of converting to Machine Bodies. Her daughters, Maetel and Emeraldas, were against this as there were other humane ways but Promethium was dead set on the course. Dr. Ban was also against the idea and in order to reach a more mental link with his wife tried to use his consciousness uploaded into nanomachines for Promethium's mechanization to convince her of other ways besides just mechanization. Unfortunately, the process went wrong due to interference from another scientist named Hardgear and upon mechanizing, Promethium had instead become a cold machine guided by Dr. Ban's intelligence. With the last of her free will, Promethium sent her daughters away on the Galaxy Express 999.

When Hardgear had tried to have Promethium integrated into him the process was worked against him and he ended up assimilated into Promethium, becoming a tyrant forcibly promoting mechanization under the illusion of choice. However when Maetel, Emeraldas, and a few of their companions proved to be obstacles, Promethium tried to get Maetel on her side through a clone. It was at that point that Promethium's new ruthless persona had overtaken her previous one much to Maetel's anguish when she was captured. With Emeraldas kept busy by Promethium's clones, Maetel was about to be mechanized until the still human citizens of La Metal revolted.

Maetel had escaped with dangerous information unknown to Promethium. By then Promethium came into conflict with Maetel, Emeraldas, Captain Harlock, Tochiro Oyama, and a few other rebels. With Promethium occupied, Maetel used the data she received to cut off power from La Metal's core to the Machine Men including Promethium causing her body to turn to dust. All the while leaving the capsule containing Dr. Ban's consciousness behind.

Promethium however had reconstituted herself on her new artificial planet, Planet Promethium. Promethium had continued her goal of conquest until the sacrifice of the boy Nazca to offset the living screws. Unfortunately this only powered Promethium down and did not stop her from rebooting years later.

By this time, Maetel seemed to have joined Promethium in assisting her Machine Empire even bringing the boy Tetsuro as the next living screw. However, Tetsuro had broken free of his imprisonment and Maetel had used the capsule of Dr. Ban along with the energy fallout to destroy the Great Mother Planet along with all of the systems that would have brought Promethium back, ending her reign once and for all.

There's much speculation on Queen Promethium's relationship with Yayoi Yukino from the Queen Millennia manga series which took place centuries in the past. Queen Promethium's human self was seen in the Maetel Legend OVA series, and said series was revealed to follow the Queen Millennia manga where Yayoi survived. Given La Metalian's millennium-long lifespans, this is possible. Holy Queen Larela also appeared as the previous queen of La Metal.[1]

That said given the loose continuity of the Leijiverse, it's unknown if Yayoi and Queen Promethium are the same person. It's possible Queen Promethium make actually be a clone of Yayoi given Nazca's discovery of a secret laboratory full of reserve clones in Space Symphony Maetel.

Promethium is a radioactive metal element used for research, especially the kind used for atomic batteries. Leiji Matsumoto used this element as the queen's name because it can only be handled in a reactor and the fact that it is a synthetic element, referring to Promethium's status as a fully mechanical and utilitarian being.

The element itself is derived from the Greek myth of Prometheus, a human created in the likeness of gods and was taught how to use fire to help civilization grow. This refers to how Promethium created the Machine Empire upon acquiring her Machine Body.

Community content is available under CC-BY-SA unless otherwise noted.
Advertisement